Also, this could be a much wider discussion regarding a dynamic coinbase etc… to potentially target an inflation rate but given a hard fork is soonish it might(?) make sense to at least resolve the supercharged coinbase debate before then (again, they currently do not expire).

good idea, it look like atm the biggest priority is to decide on a sensible system to make those kinds of decisions. Even if it is a short term solution.

So c) would follow the original proposed roadmap if I understand correctly ?

Personally it would get my preference. I know many people in the French community that have invested in Mina by considering these tokenomics. Sure nothing is ever promised and set in stone, but I still don’t like the idea of ghosting people that are early adopters and enthusiasts.

I agree a lot of people take that as how the system works while It’s better if it works as in docs. If a change decision happen it should be done and be clear. It creates a lot of confusion for a long time.

I think (c) would be best for now for supercharged, a smooth change seems good for avoiding any big changes to the system at the hard fork. If easy for O(1) to implement for the upcoming hard fork, an if statement like the one you have seems simple enough, I think this would follow the original supercharged tokenomics?

Here’s the chart of total supply increase per epoch, so let’s use 0.45% (this may be a little on the low side as more stake unlocks and/or fill rate changes, but it’s going to be ballpark correct). 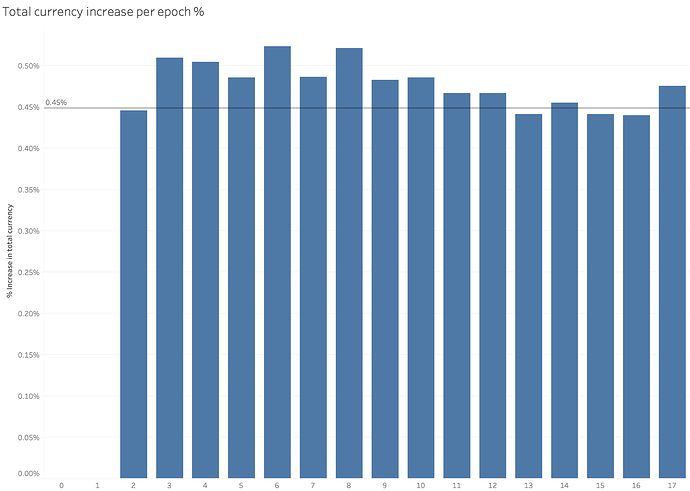 So extrapolating that out to 15 months (or 30 epochs) I get the following chart for supercharged yields for your values (assuming the hard fork is at epoch 20 slot 142800 and the second drop off starts at the start of epoch 24 for simplicity, which is slot 171360) 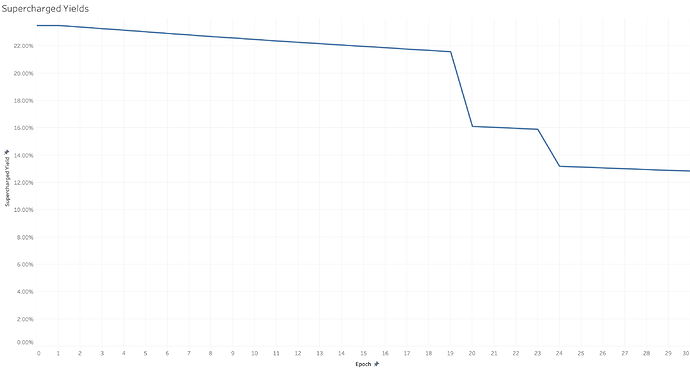 Thanks for that, looks like my multipliers were off then. If we were looking for 18% and then 15% for the original roadmap, extrapolating from your chart, I think that would mean ~1.7x for the first 3 month slot, and then 1.5x for the second 3 months. if its easy to rerun, could you try those and see if it matches up?

Yeah that seems close. This is of course based on an assumption in the total currency increase. Using values of 1.7 at epoch 20 and 1.5 at epoch 24 with a 720 coinbase. Added that chart as well for clarity. 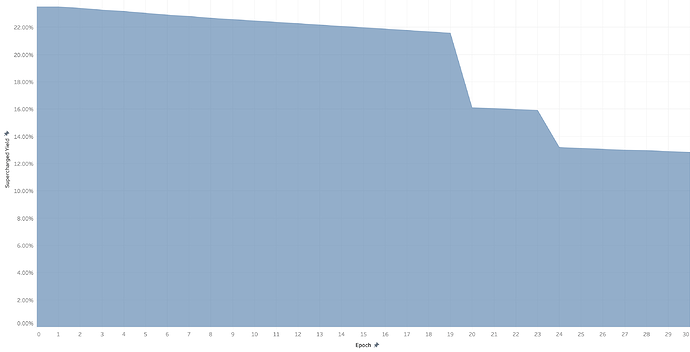 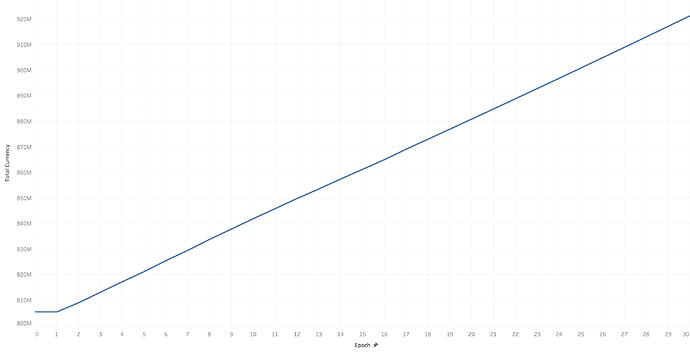 Oh, sorry I uploaded wrong one

and I can’t currently edit the post (will do when I can). Sorry about that but here is the right one. 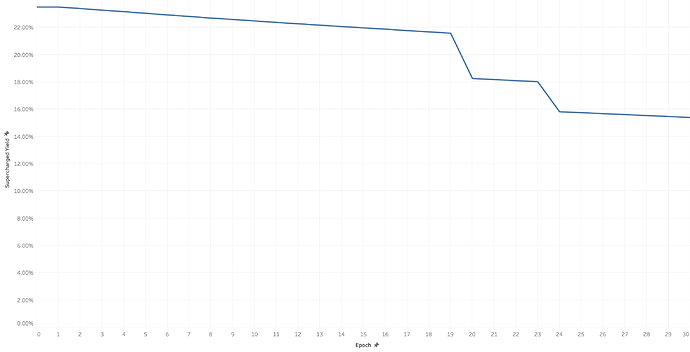 I don’t think its neccesary to change the supercharged multiplier, inflation rates decreases over time, just at the end real inflation will be x2 inflation coded.

Did I understood it ok?

P.S.: sorry for my english.

Supercharged rewards were introduced as an early incentive and I think most(?) would want to deprecate them inline with the initial tokenomics. You understand correctly, as currently these supercharged rewards in the protocol will not expire and eventually (albeit it’s a few more years) will be unlocked so it needs a hard fork to remove them.

The issue here is likely the timing of the hard fork. The above estimate is grossly overly optimistic with a hard fork at epoch 20. I think the most important consideration is having a clear implementation as to when these rewards will reduce and expire. The next major unlock occurs at slot 172800 after a year (12th March 2022 17:00:00 UTC) ref Mina Time Machine - TowerStake. Targeting this date seems more realistic?

So this projects, keeping the existing implementation until 172800 (12 months), then decreasing to 1.25 for the period 12-15 months, after which it’s just a regular coinbase i.e.:

As it is unlikely a hard fork wouldn’t occur significantly before 12 March, likely the difference in implementation would be negligible. I prefer the earlier drop-off but I think there is more clarity when the slot can be well defined well in advance - this is based on the assumption there won’t be an interim hard fork before snapps are released. 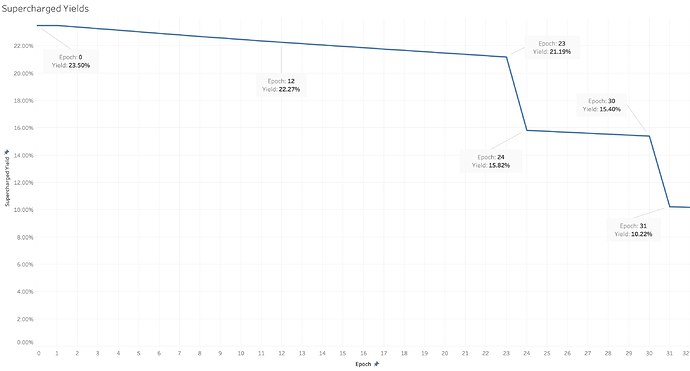 Hey @garethtdavies @evan.
This idea seems like it has been well vetted. Would you be open to polling the community on this one, and if there is broad support then moving forward with a MIP?

Hi Brian, you link seems to be the wrong one.

A fair bit of time has passed on this, and in a few weeks, we will be at month 15, which was the original outline for removing supercharged rewards.

Given that the hard fork is not imminent and will likely happen well past 15 months and that supercharged rewards have been higher than initially projected (due to the lack of any hard fork to reduce them), assuming there is some social consensus, I will draft a MIP to remove them following the hard fork. Under this proposal, after the hard fork, locked and unlocked tokens will receive the same rewards. Currently, unlocked tokens still receive approx 21% APR. Assuming other tokenomics proposals are not implemented, this will result in a halving of rewards for unlocked tokens. Best estimates for the current staking rate are around 90%.

Is there an estimate of how long until the next hard fork? With there not being one in sight it feels like something should be done sooner than the next fork to fix the inflation because it’s not following the original tokenomics that were published.

Inflation is certainly higher than the expected one. Should be modified ASAP for the clearness of report.

Q3 `22 according to Mina Ecosystem Roadmap - Q2 2022 | Mina Protocol. It’s worth noting that there were only 805,385,692 in the Genesis ledger as opposed to the 1 Billion in the initial tokenomics so we are actually running under schedule - as a result, I don’t think there is any real urgency to this and it can wait until the next planned hard fork.